Work in an office? How productive do you feel in the heat….? 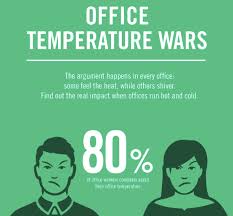 According to a OnePulse survey of 200 office workers carried out by office fit out specialist Morgan Lovell, 90% of UK office workers feel less productive when the office temperature is. 44% of workers claim that they move away from their desks to counteract the heat, 72 per cent said they’d move to a cooler part of the office, while 23 per cent said they’d go to a meeting room.

Sam Sahni, head of workplace consultancy at Morgan Lovell London, said: “It has been said before that an office that is too cold can greatly impact productivity as we focus our attention on warming up, rather than generating ideas (Cornell University research) and our survey demonstrates it’s the same in the heat. In general, any time the office temperature is too extreme, our ability to focus is hindered.

“The fact that over half of our respondents say they would leave the office implies a break in collaboration and team cohesion during hot periods. This break in cohesion and lack of productivity can really impact a business, but there are ways employers can prevent this from happening. Firstly, by providing agile working capabilities that enable movement and flexibility through technology and flexible workspaces, so that employees are not just confined to one space.

“Secondly, it’s a good idea to provide options for staff, for example ‘office temperature zones’ such as cooler breakout spaces so staff don’t need to disrupt their working day just to get comfortable.”

The survey also asked what employers are doing to counteract the heat. Almost two-thirds of respondents said they have fans or air conditioning, half said they have windows that open, 37 per cent are given a more relaxed dress code, while 33 per cent are provided with iced drinks or ice cream.