Do you know your most unhygienic workplace habits?! 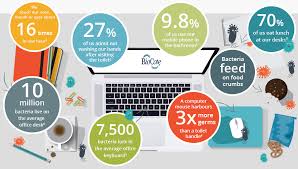 Sinks crammed with dirty dishes. Keyboards drowning in crumbs. Colleagues who cough and splutter without using a tissue. Everyone knows that a unhygienic workplace can be a breeding ground for all kind of nasty bugs. But just how unhygienic is your workplace?

According to a new survey carried out by SCA (manufacturer of hygiene brand Tork)  of 1,000 workers in the UK, it found that nearly two-thirds of Brits wish their place of work was more hygienic, with just a quarter of respondents rating it as very hygienic.

One in ten respondents said they believed their health has been compromised by poor workplace hygiene standards, which can be problematic for businesses as one in ten workers said they’ve taken time off of work because of lowly hygiene levels, costing their employers time, money and resources. In fact, 40 per cent of survey respondents reported taking up to a week of sick leave within the last month as a result of subpar workplace hygiene practices.

Worryingly, one-third reported experiencing diarrhoea, 15 per cent have been on the receiving end of a bout of food poisoning and one in ten have even contracted a skin condition at work.

But the damage isn’t limited to workers themselves. Nearly half have passed on an illness contracted at work to a family member or friend.

So who are the worst culprits for bad hygiene in the workplace? Just over half of men surveyed aspire to a cleaner work environment, compared to two-thirds of women.

Women are far more likely to carry out additional workplace cleaning, with 61 per cent admitting to putting in some cleaning elbow grease compared to less than half of male workers. Women are also more likely to consider changing jobs because of hygiene concerns, with one in ten saying they’d be willing to take this step, compared to just 5 per cent of men.

Finally, the report found that up to half of workers have caught an illness from a colleague’s bad hygiene practices and more than a quarter of British workers find their colleagues’ hygiene habits disturbingly unhygienic.

With all this in mind, how hygienic do you find your workplace? or do you already know what an unhygienic workplace is?